That celebrity-endorsed bitcoin ad is probably a scam 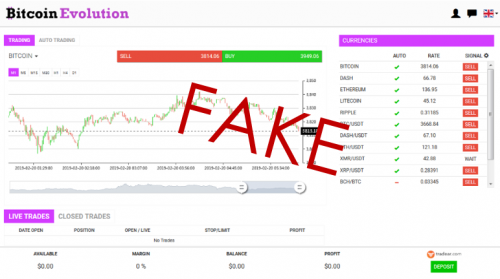 ASIC is aware of fake endorsements being used to promote cryptocurrency scams and has received a number of reports from the public.

The fraudulent use of celebrities, prominent businesses, news sites and government agencies in the marketing of financial products and services is a key indicator of a scam.

ASIC is aware of two situations in which fake celebrity endorsements are being used:

What is a crypto trading robot?

These websites are advertised using fake celebrity endorsements, which appear on social media sites such as Facebook, Instagram, LinkedIn and Twitter. When an investor clicks on the article or ad, they are often sent to a ‘mirror site’ – a fake version of a legitimate news site such as ABC News.

Reassured by what they think is a legitimate celebrity endorsement, investors who visit the fake crypto-trading website, where generally there is a reference on the website to margin FX trading or contracts for difference (CFDs). The investor is then asked to deposit funds into an account via numerous methods, which may include crypto wallets or bank accounts. In some instances, when the investor logs into their account, it may look as though they are making profits initially (due to fake data), but eventually they will see ‘trading losses’, even though no actual trading is taking place.

When investors eventually ask to withdraw their funds, scammers either cease all contact or demand further payment before funds can be released.

Fraudsters are often based overseas and so are their scam websites, which makes them notoriously difficult to close down. It also makes it almost impossible to track, trace and recover lost money. Money paid into an Australian or foreign account is often cleared and moved within minutes to other offshore accounts.

To pull off these scams, fraudsters combine online search terms – for example a cryptocurrency plus an Australian celebrity’s name and image – to generate fake news articles and ads on social media. Online search engines and news sites often republish those articles or ads, perpetuating excitement and interest in the cryptocurrency, leading to a purchasing frenzy.

As more people buy into the cryptocurrency, its value rises ('pumps' up) and other traders latch on, further boosting its price. The scammers then sell ('dump') their own share in the now-overvalued cryptocurrency. This causes its value to plummet, along with any hope for victims of recovering their initial investment.

Think you have been scammed?

If you think you or someone you know has been scammed, lodge a report of misconduct with ASIC and report the matter to police. You can also make a report to the Australian Cyber Security Centre at ReportCyber. Your report may disrupt the scammers and hopefully will warn others to avoid it.

You should contact your bank as soon as possible if you think you have been the victim of a scam. You should also report the matter to police.

That celebrity-endorsed bitcoin ad is probably a scam

Stats on COVID-19’s impact on business registrations
Read this before trading CFDs
What to do if your small business is owed money
Business loan repayment deferrals are expiring
Mortgage repayment deferrals are expiring: customers need to act now
Fundraising activity and ASIC intervention during COVID-19
Some modules are disabled because cookies are declined. Accept cookies to experience the full functionality of this page.
ACCEPT COOKIES
We use cookies to optimize the website, no personal information is stored. Learn more
DECLINE COOKIES ACCEPT COOKIES